While many fly fishermen choose to target certain species such as Rainbow Trout, King Salmon, or Steelhead, bass fishermen would be surprised to learn that artificial flies are every bit as effective for Largemouth, Smallmouth, and Spotted Bass.

The best flies for bass fishing are usually very basic in nature. It does not take a rocket scientist for bass anglers to be successful at the local farm pond or inland river. If you know what to throw, you can get much more than just a few nibbles from your local, friendly, Largemouth, Smallmouth, or  Spot. They even target every size.

In the right conditions, they can even produce trophy-sized fish. There are times when they tend to work better than anything else. The greatest fishing lures in the fly fisherman’s box are usually simplistic, inexpensive, and effective. This is a top 10 list of flies that every angler needs to have in their box if they wanna catch any bass species. They work all around the country as well as across the globe. 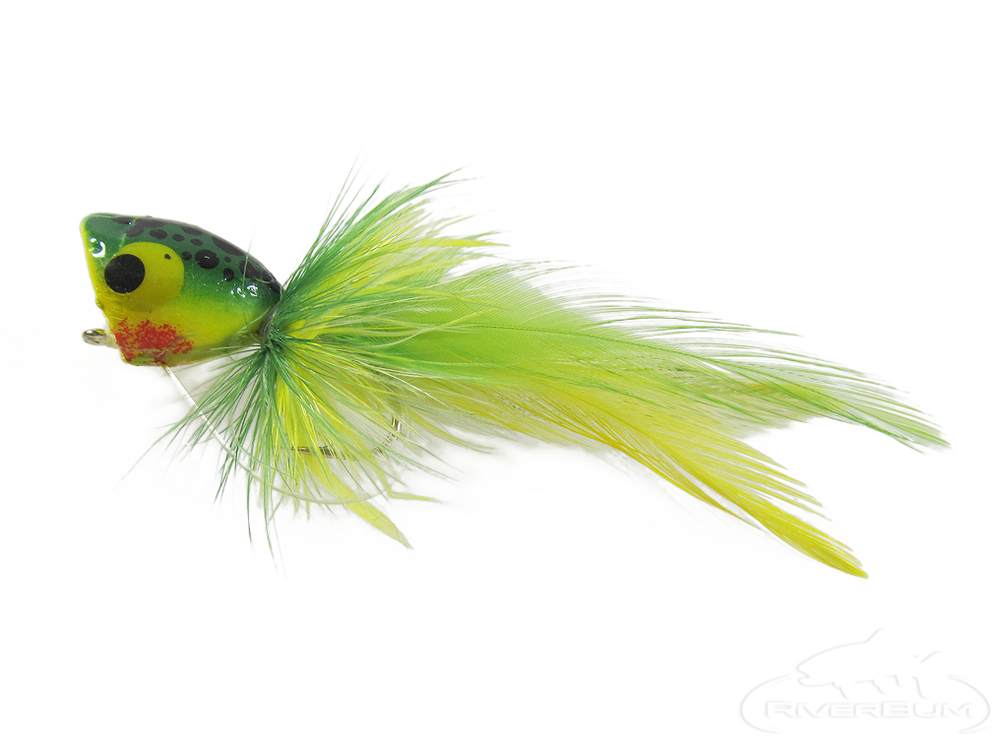 The hard popper is a topwater popping masterpiece. This is great for when the fish are hitting topwater but it can also be effective in colder climates too. It has a very deep cupped mouth that produces a noticeable bubble trail on the jerk. This perfectly mimics a frog.

It has a feather skirt that produces a lot of enticing motion even when it’s sitting dead still. This can make the difference when the fish are lethargic and sluggish to hit anything. The Largemouth is especially attracted to frogs and other amphibians. Frog fishing is its own sport within a sport for this reason too. Hard-headed poppers are a choice you should consider pulling out when the fish are near the surface. The Hard Popper Frog is the one we choose to fill this niche. Its effective, versatile, and inexpensive. 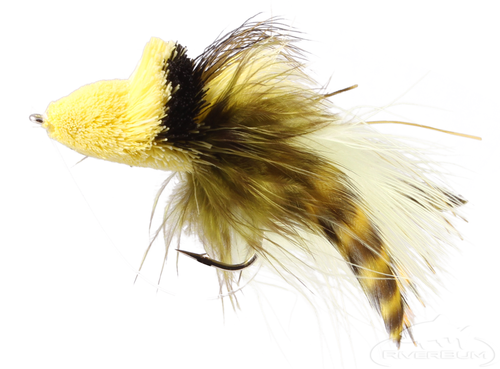 Poppers are always very effective but having one that can also dive is truly worth it. This is especially true when you have your favorite fly tied on but it just won’t sink. This is a problem you will often run into also.

The Diving Bass Bug can work the surface as well as the subsurface. It serves an important role as a traditional popper but you can get it to dive by using a strong retrieve. It tends to do very well during the spawn.

It looks like hundreds of potential insects, fish, or other prey items that many fish would not think twice about before choking down. It comes in a few distinct but very effective color patterns. Colors for fishing clear water as well as dingy, stained, or dirty water. This is the type of presentation that does not target a specific size fish. Large or small, they can all be caught with the Diving Bass Bug. 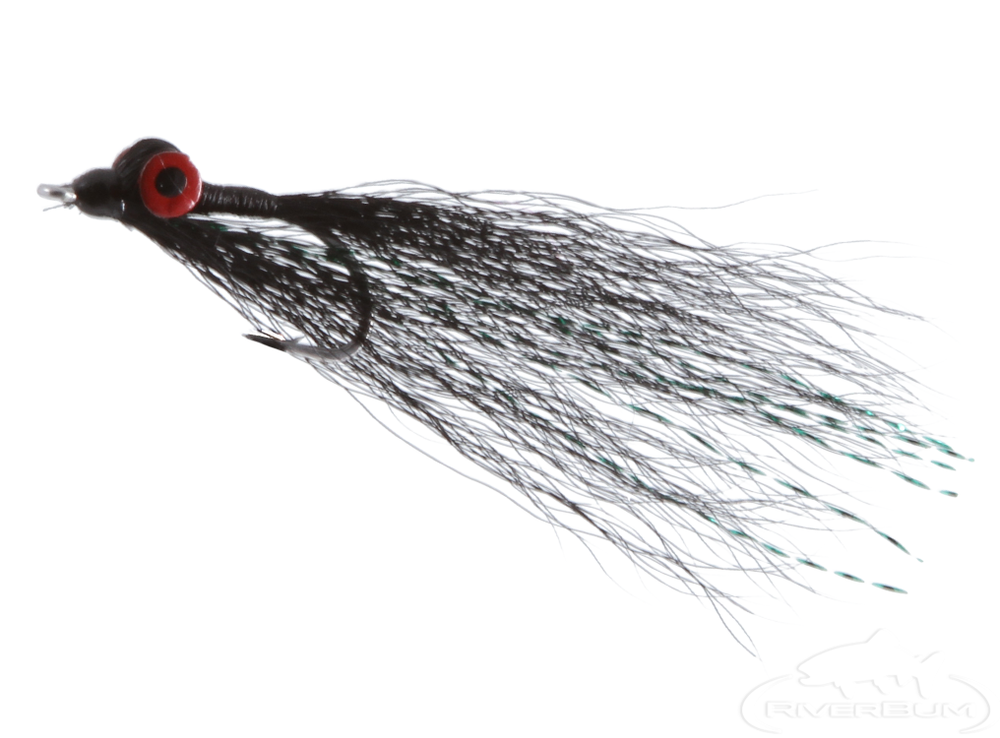 The Clouser Minnow is such a classic. The Clouser will catch almost everything that swims. It is a great, unconventional, streamer-style, minnow presentation. Pretty much all predators eat smaller fish. This is one of the reasons it is so effective at catching everything.

It is a very basic fly too. It’s tied with nothing more than flashabou, head cement, and a couple of whip finishes. The pattern was originally intended to be a Smallmouth offering. It works extremely well for all carnivorous species though. It can come in many colors also.

The Clouser Minnow is also a very great starter lure for those who are just getting into the sport. Because it is so universally versatile, it can be used regardless of what species swim in your area. The great thing is that is it very inexpensive so purchasing a ton in different colors is easy on the checkbook. It has a very natural, lifelike swimming pattern that is great for mid-water applications. 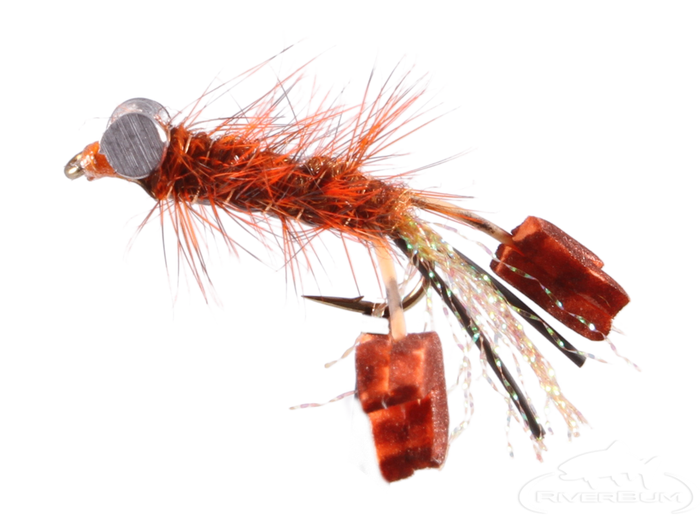 Nothing is more exciting than having a huge fish blow up on a crayfish. Especially when the bass are on crayfish beds, having a nice imitation will work wonders. The Fighting Craw has a couple of very handy (no pun intended) buoyant claws. When it hits the water, the claws float upwards into the defensive position.

It also has a couple of weights on the back to make it bottom heavy. When real crayfish swim, they swim backward and the tail always goes first. It would be very difficult to cast real crayfish on a traditional fly rod.

It is also difficult to find crayfish that are small enough to target all sizes of fish in the lake without losing them every other cast. The action that the claws have on this bait is just incredible. Especially fun with the Smallmouth Bass angler, these is one of those baits that will absolutely destroy huge Smallmouth as well as Spotted Bass. The claws are made of foam. Its even popular with panfish. 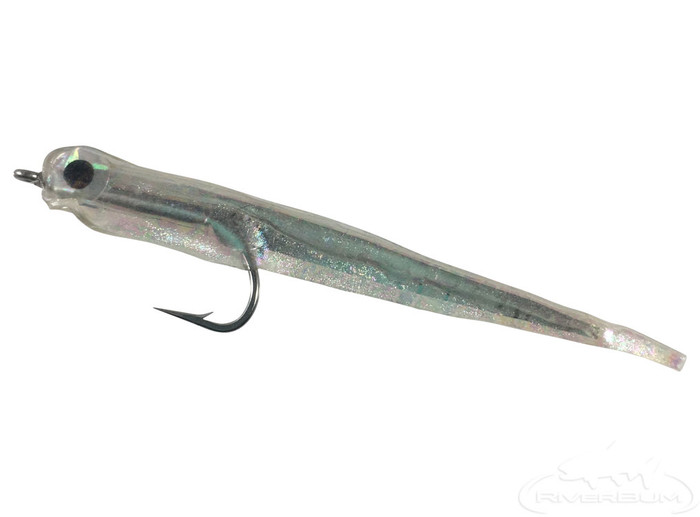 Call it what you will, the Gummy Minnow is no doubt a producer on pretty much anything with fins. It looks identical to baitfish like Emerald Shiners, Fathead Minnows, Gizzard Shad, and even anchovies for saltwater anglers.

Plastic minnows are generally effective everywhere but the Gummy Minnow has capitalized on the concept with a very soft and realistic body. There is also a hint of added flash for added realism. This incredible bait can be used for Trout, Char, Salmon, Steelhead, and even most panfish.

Baitfish are the natural food of most bass species. When the baitfish start to school up in very large groups, this is prime fishing conditions. Throwing a pattern like the Gummy Minnow will get you a bite very quickly. Although it makes one of the best Crappie jigs when putting on a jighead, don’t let that fool you. It’s hard to find any decent fisheries with fat fish and no baitfish, minnows, or shad. 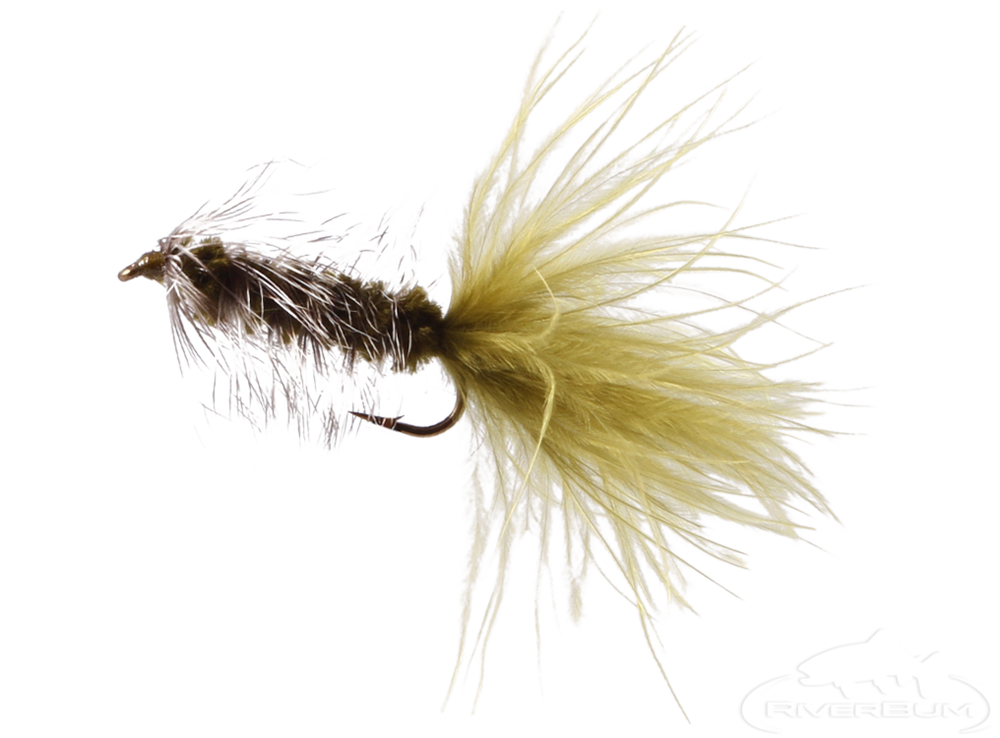 One of the most versatile choices in the tackle box is also one of the cheapest and easiest to tie. This great value is the Wooly Bugger. It is a very unique design too. It actually looks like a bucktail.

It is actually a wet fly streamer. It resembles many different species of insects and other prey such as minnows, sculpin, leeches, crayfish, and other natural sources of food. The Wooly Bugger is the most popular and widely fished fly of all time. This is for one reason. It works. It just catches fish.

That is not only for trout either. If you are a fly fisherman, we recommend you try this one out for any species.  It works so well that we recommend you get a couple of boxes for just this lure alone.  Make sure to have every color and size out there. It is that effective.  You can scale up your size when you choose a lure to get bigger fish and scale down to get smaller fish.  We highly recommend this one. 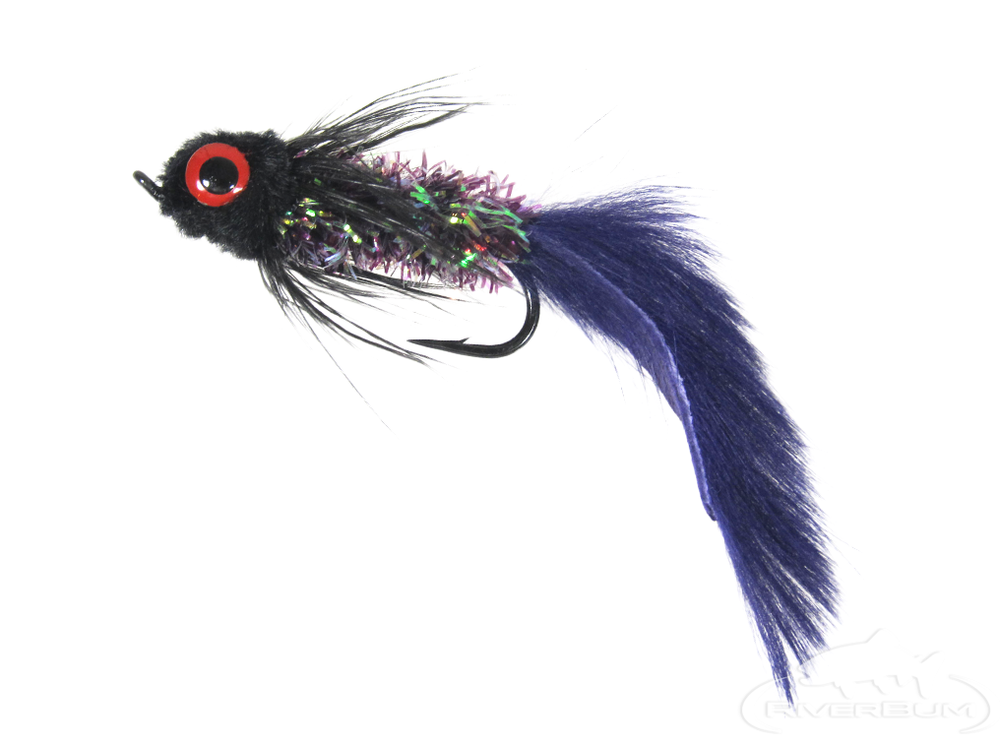 Especially in waters where leeches are common, you can use a Hot Shot Leech to get some great results. Leeches are not typically bass forage but when they are, they are almost unbeatable in terms of effectiveness. Leeches make a great addition to any box. There isn’t a Largemouth that can resist.

It comes equipped with weighted eyes to get down to where the fish are. This means it can be used to fish any area of the water column. The Hot Shot also has a natural feather tail, and a little bucktail.

Leeches are normally used to catch Walleye in Lake Erie or other places but they are especially effective in warmer water when the predator’s metabolism rises. Hot Shot Leeches come in a variety of colors to choose from too. The natural appearance can get a bigger bite from a much bigger fish in clear water too. Smallmouth bass is naturally used to seeing and eating leeches also. 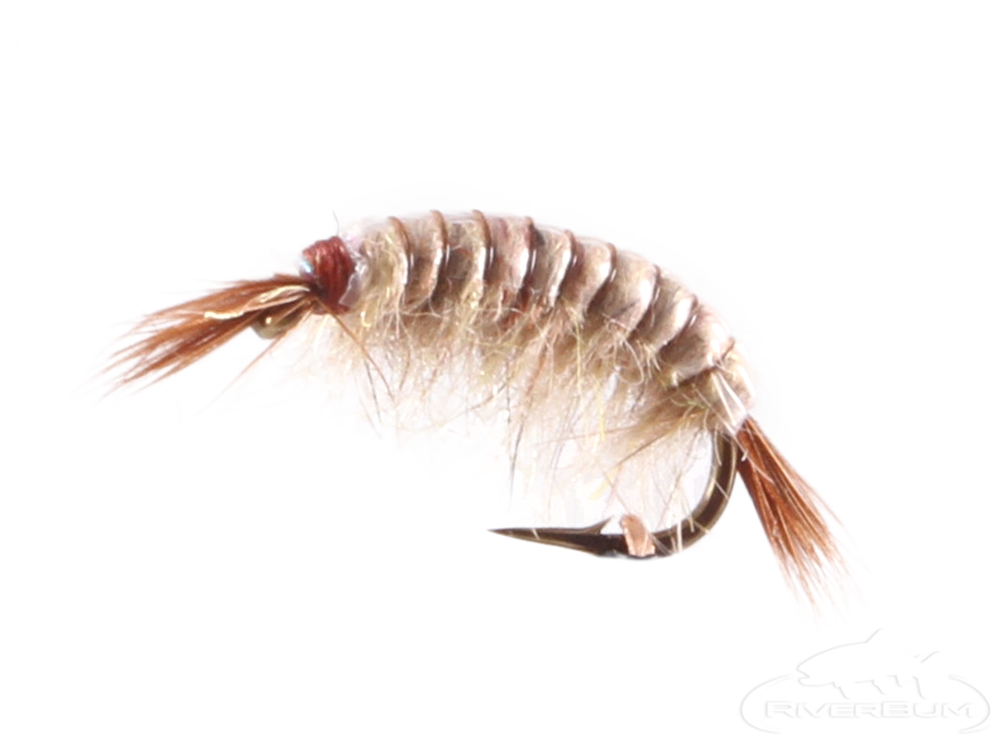 There are some bodies of water where the predators refuse to feed on baitfish. In situations such as these, the primary forage is either freshwater shrimp, crabs, clams, or scuds. The Riverbum Scud fly is a perfect addition to the line in these situations. It is a great choice.

Scuds are not found in a ton of water bodies but when they are, the fish go after them almost exclusively. The Tan Scud fly also does a   great job of imitating wax worms, grubs, maggots, or other larvae that are commonly found.

Scuds are extremely versatile too. Even Spotted Bass, panfish, and catfish will hit a scud. It is originally a trout lure and can be productive on pretty much all species. It also closely mimics a freshwater shrimp. It is a mid-level diver. You will see the most effective bite when fish are suspended. It takes a little longer to tie than many other options. Still, it is inexpensive and it works well for bass. 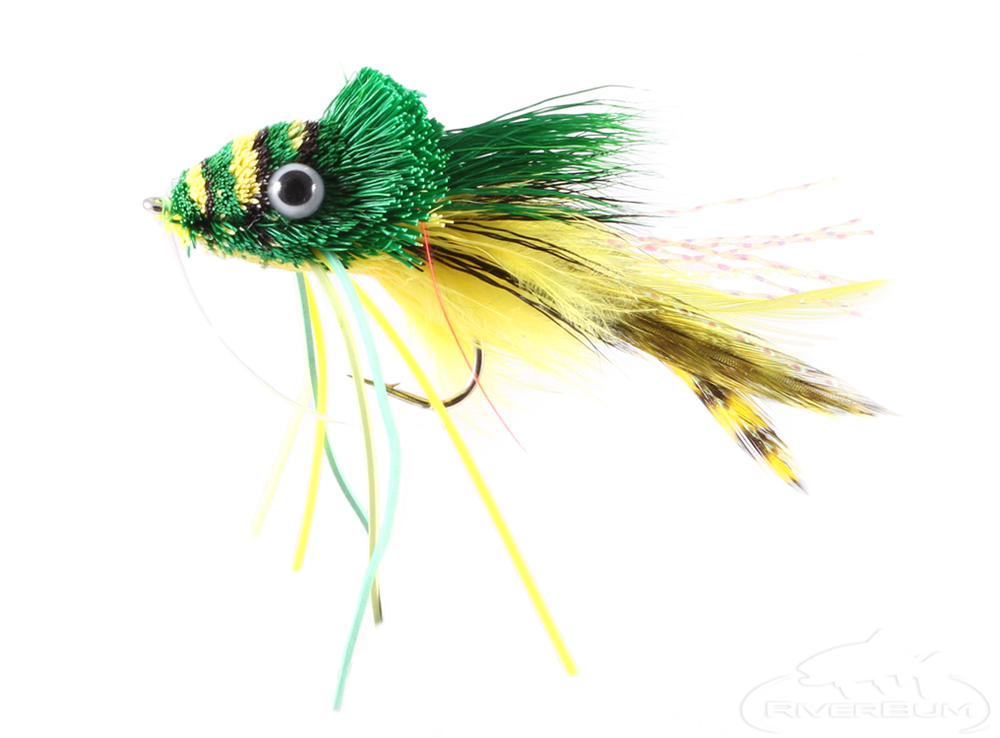 Frog baits are not something most people would think of when tying their next bait. Even so, frogs are especially great for Largemouth and Smallmouth. Even Northern Pike will smash them.

There is not another frog presentation on the market that is as popular with the fishing guides. Regardless of your skill level, the Swimming Frog is quite possibly, the best bass fly out there. This is because it is easy to use for pretty much everyone.

It is a topwater bait but it dives as it is pulled in. It leaves a trail of bubbles that appeals to hungry predators. It is a popping frog that has a great, noticeable, sound. It is made out of deer hair and hackle. This provides a ton of natural action in the water. It is extremely hard to beat. 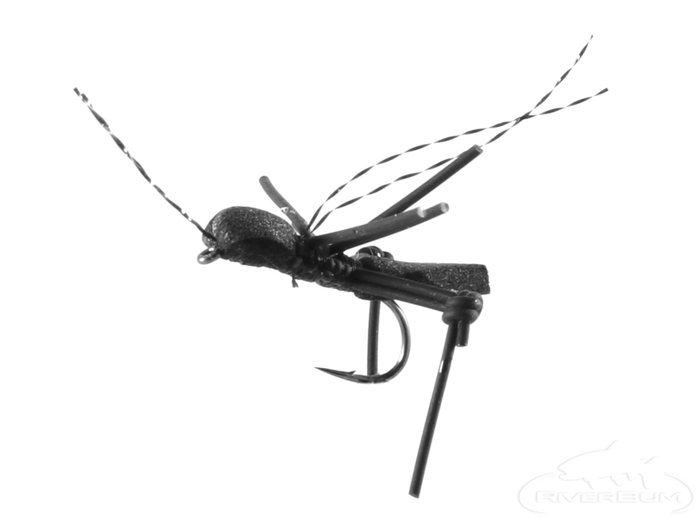 We have all tried to fish with crickets at some point in our lives. If you haven’t, we highly suggest you start. Crickets are great presentations to target panfish and pinfish, but they can also be used to target trout, bass, and salmon.

Crickets are hard to come by at certain times of the year. Having a representation of the cricket can make all the difference in highly pressured fisheries. Finding something that is realistic and effective can be a challenge all in itself.

The Foam Cricket is a topwater bait. It is good for every time the fish are holding closer to the surface. It is made out of foam so it floats on the surface just like real crickets. With its very realistic design which is also very simple,  it can be effective at most places that house fish, especially the ones where real crickets are often used. You can get very cautious and wary fish to take a swipe at the surface.

In Conclusion – There Are Many Great Bass Flies

The best flies for bass fishing are simple, effective, and full of action. They are much more prone to bite something they can chase down instead of a motionless lure. There are many great artificial topwater, subsurface, and bottom level baits out there. The greatest one is highly debated. Whenever someone asks the question about which choice will work in their area, you have to give the party line answer.

There is no single lure for fly fishing for Largemouth, Smallmouth, or Spotted Bass that will catch them every single time. It should never be difficult to choose one either. It is up to the angler to be versatile and willing to try anything. That doesn’t mean that there are not some great ones out there that have be proven to work again and again. These are great ones to get started with as well as keep in the box for many years later. You should catch some fish on one and build some confidence in it.

What do you think? Do you agree with our list? Drop your answer in a comment below! Tell us what you think!