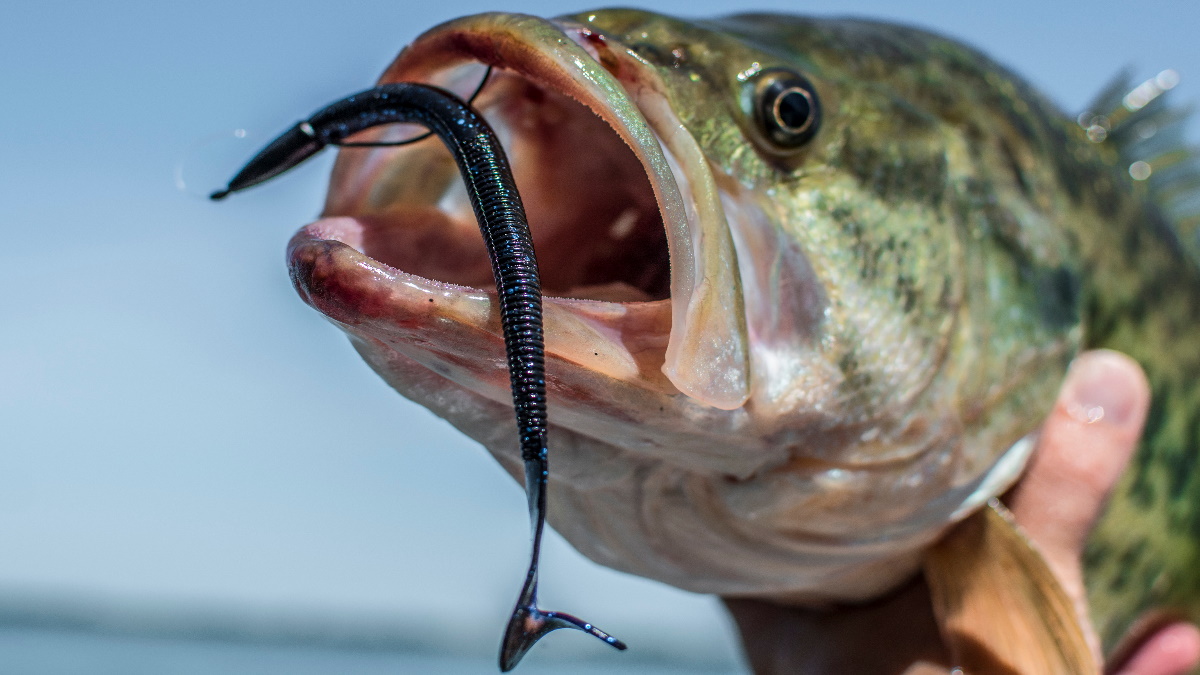 If you like to fish with worm lures, largemouth bass, smallmouth bass, and spotted bass will all take the bait. There is often a lot of discussion about the best plastic worms for bass. There are so many lures available and this can make it almost impossible to pick the right one. Believe it or not, they all catch fish. Even so, some will work better than others. This is because fish change depending on conditions, water clarity, weather, temperature, seasons, and many other things.

No one worm bait is going to catch great fish in every one of those situations for you. You need to make sure you have enough different fishing lures available so you can catch fish regardless of what situation you find yourself in. Because of this, the question should never be which one works better than all the others. Even if someone could give you an answer, there is still a chance that they may not work where you fish. Only one can decide the best worm for you. That is you.

There are a few different soft plastic worm bodies that have been proven to be productive in many places though. We have not seen waters where they are ineffective. They produce numbers of catches pretty much everywhere where bass swim. This is going to be a list of our favorite worms lures for largemouth and smallmouth bass. Make sure to give them a try. The worm lures on this list can be used for tournament fishing as well as fishing for recreation.

This awesome stickbait is so versatile. You can rig it on a Texas rig, Carolina rig, neko rig, ned rig, wacky rig , shaky head, and pretty much anything and everything else needed to bring those big bass out of the cover.

For those who have yet to see the action of the original stickbait, you may be a bit confused. If you look at it as it falls, it is barely anything. It does a very subtle shimmy as the bait falls to the bottom of the water. It does not look like it would accomplish much of anything but it does. This lure has caught more big fish than many lures put together. The huge bass absolutely love it. This is a lure that every angler should consider trying out. Fishing senkos just works.

No competing stickbait compares with it either. It is  in a class of its own. No other stickbait has the action that the Gary Yamamoto one does. This is because the plastic is very soft. Other manufacturers have tried again and again to create a bait that falls the same but is more durable. Each time, they have failed. You have to select action over ripped baits because one doesn’t exist without the other. They also cost more than the competition as far as price goes.

Ribbon tail worms are great baits when you want a ton of action on the retrieve. Many anglers love to use ribbon tails for one reason. They catch big fish. Specifically, this one from Zoom is very effective and has caught a ton of bass. You can use them to imitate snakes swimming through the water. They are also used for very big catches because of size.

The worm has a very long tail that is filled with action. You can vary the action depending on how you rig it. Zoom ribbon worms are about as classic to bass fishing as the fishing hook is. Almost everybody has tried one at least once and if they have not, they should. They make an extremely versatile option when you want to fish a little bit faster for whatever reason. They work very well on most bass fishing rigs such as the Texas rig, the Carolina rig, and the punching rig.

They can also be very effective in very cold water when you are trying to fish with a more finesse approach. Sometimes, moving very slow with that tail moving around is what it takes to get you the strike. Keep in mind that this is a lure that you want to reel in and retrieve with. You do not get to use it with the wacky rig, drop shot, or neko rig. Give it a try when you want to reel in.

Finesse tactics are some of the most effective producers in colder water especially if you are out trophy fishing. When the water is cold and the fish are to lethargic to chase anything, you can usually get a few more strikes when you have something very subtle and slow moving tied on. These are the situations when a lure like the Zoom Magnum Finesse Worm really shine.

The magnum version is a bigger version of the original Zoom Finesse Worm.  The original works too.

The original worm is a thinner version of a trick worm. The best part of having a thinner bait is stealth. When the fish see a big bait, there is a certain amount of water displacement that occurs when it is retrieved. When you fish with the same one but thinner, the fish see the same meal but feel less threatened. It is better for pond bass. The magnum version of the original classic is just another tool in the box to go with you on that trip for big fish. The size is large.

This can help keep some of those smaller fish off of your bait. You will need a pretty good sized hook too. While smaller hooks can and will work with enough practice, we suggest starting on a bigger hook first before downsizing. With the right hooks, you can throw these on a drop shot, wacky style, Texas rigged, and most other ways commonly available. These can be the money maker in your box this season. You can always get the normal sizes too. They are just as good.

Do not be fooled by the simple appearance of a Zoom Trick Worm. Although it is very basic, it is one of the very best bass fishing lures in the world. It has caught a ton of fish in years past but some of us just keep on coming back to it. It has a very basic worm profile and the action is just the right amount of aggressive and subtle. It swims more like a slow moving swimbait. You can try to rig them on a Texas rig for bottom bouncing to catch the fish that are holding deep.

If you like the wacky rig, it is absolutely deadly with the technique. I would have to put it right behind the original wacky bait if I had to choose one to beat the other. It can work very well in almost any water conditions. The amount of action it has is determined by you. It can be fished very slow or very fast on a retrieve. You are the one to decide. It is a normal sized bass worm so the fish you catch on it can be every size that swims. A lot of smaller fish will bite it.

This may be something to consider. You will catch more on it but most of time, they will be smaller. Occasionally, you will land that monster from an accident on this worm. I am specifically talking about that huge fish that destroys your lure after you gave up on a cast. Still, I can suggest that you tournament fish with it because it is versatile and effective. Many tournament fishermen use them for a reason. This is because they work. They work well enough to consider.

Straight tail worms are a subject with mixed opinions. Some claim that they are a waste of time because “fish don’t eat real worms”. Still, there are those that catch an impressive amount of bass on them. We believe the Roboworm is one of the best ones you can use. It boasts some of the best action. It is easy to use and it is one of the best worms for largemouth bass. It is one of the best drop shot worms in the world. We love it because of how soft and subtle it is.

You can work it slower during cooler occasions or speed it up when the fish get aggressive. We also like that it can catch big and small fish. The fishing lure is not very big. It is the same size as the average bass worm so you can use it for everything. The Roboworm is a great one to have in the box. You want to let that long profile do the work for you. Make sure to work it very slow. The Roboworm is very versatile especially in cold water situations. Its one of the best out there.

It does not work as well moving faster and it doesn’t look as good. This is for you if you want to work the strike zone for quite awhile. It also very effective on almost every other bass rig except the wacky rig. Specifically, it was designed to be effective in drop shot rigging but it also has its place with the Texas rig, the Carolina rig, and the punching rig. We suggest trying Roboworms.

In Summary – The Best Bass Worms Are Pretty Simple

At the start and end of the day, the only one who can decide on the best plastic worms for bass is you. You decide what works best and you decide what is effective. All in all, everybody will have different experiences with different lures on the water. Because of this, everyone has different preferences. The main thing you need to understand is your success will vary from lure to lure as well as from water body to water body. You need to try a ton of baits and decide on your favorite ones that consistently work where you fish. Build confidence and choose a lure.

What is your favorite worm lure? Tell us why below in a comment! We would love to hear you!

2 thoughts on “Best Plastic Worms For Bass To Catch Fish”

One Stop Tackle Shop is a participant in the Amazon Services LLC Associates Program, an affiliate advertising program designed to provide a means for sites to earn advertising fees by advertising and linking to Amazon.com