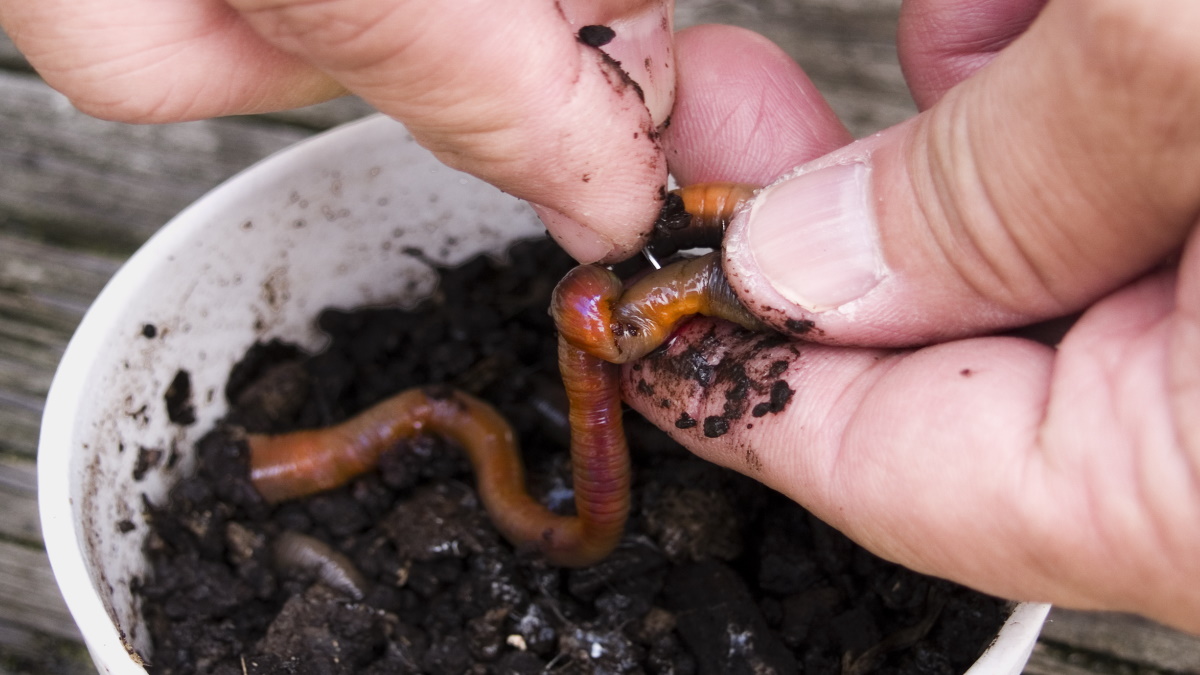 If you have been fishing for any amount of time, you already know how productive a juicy worm under a bobber can be. The basic bobber rig with a nightcrawler is a technique many of us have tried and been successful with. This method is simple and effective yet it does not begin to touch on the very complex subjects that go into how to catch fish with worms. There are actually a lot of very difficult subjects to address about why it works and how. Earthworms just catch fish.

My experience has been that these subjects are not often talked about and because of this, many lose out on some great fish. While many young anglers seem to do well with the technique, it can also be very productive for more accomplished fishermen too. Worms can catch panfish, catfish, carp, walleye, pike, bass, and many other species of fish. Many of us have started here and we can never bring ourselves away. That’s fine too. We will explain how to do it.

What Hook Should Be Used? Do Hooks Even Matter?

The very first thing you need to understand before piercing the worm is that hook selection does matter. I will say it again. It absolutely makes a difference. Selecting the wrong hook can decrease the action of your bait, compromise hooksets, or both. The proper hook that you select has a lot to do with what size of worm you want to throw as well as what size of fish you want to catch. For panfish like bluegill, crappie, and perch that have smaller mouths, I suggest you try a size six or size four long shank Aberdeen hook that has a thin wire. Thin wires keep worms alive.

You decide if it has barbs on the shank. This would make it a bait holder hook. You can use a barbed shank hook but it is not necessary. Just a traditional Aberdeen hook will work fine as long as it is thin. For big fish or bigger fish that have a bigger mouth like most game fish do, try using a bigger hook but make sure it is still thin. Just a bigger version of an Aberdeen hook will work just fine and the size depends on what size of fish your targeting. Many hooks work well.

What Is The Best Way To Keep The Bait On The Hook?

The best way to avoid losing bait is to make sure you hook the worm properly. Depending on the size, you may need to hook it differently. Losing bait is pretty easy and it will never cease to happen. The loss of bait can be compensated for by catching the fish that takes it. You can reduce the amount you lose by following some simple tips and strategies. The first one is to make sure you put it on the hook correctly. The more times you pierce a worm, the more secure it is to the hook. The more secure it is, the less bait you lose. Little fish love to pick at worms. 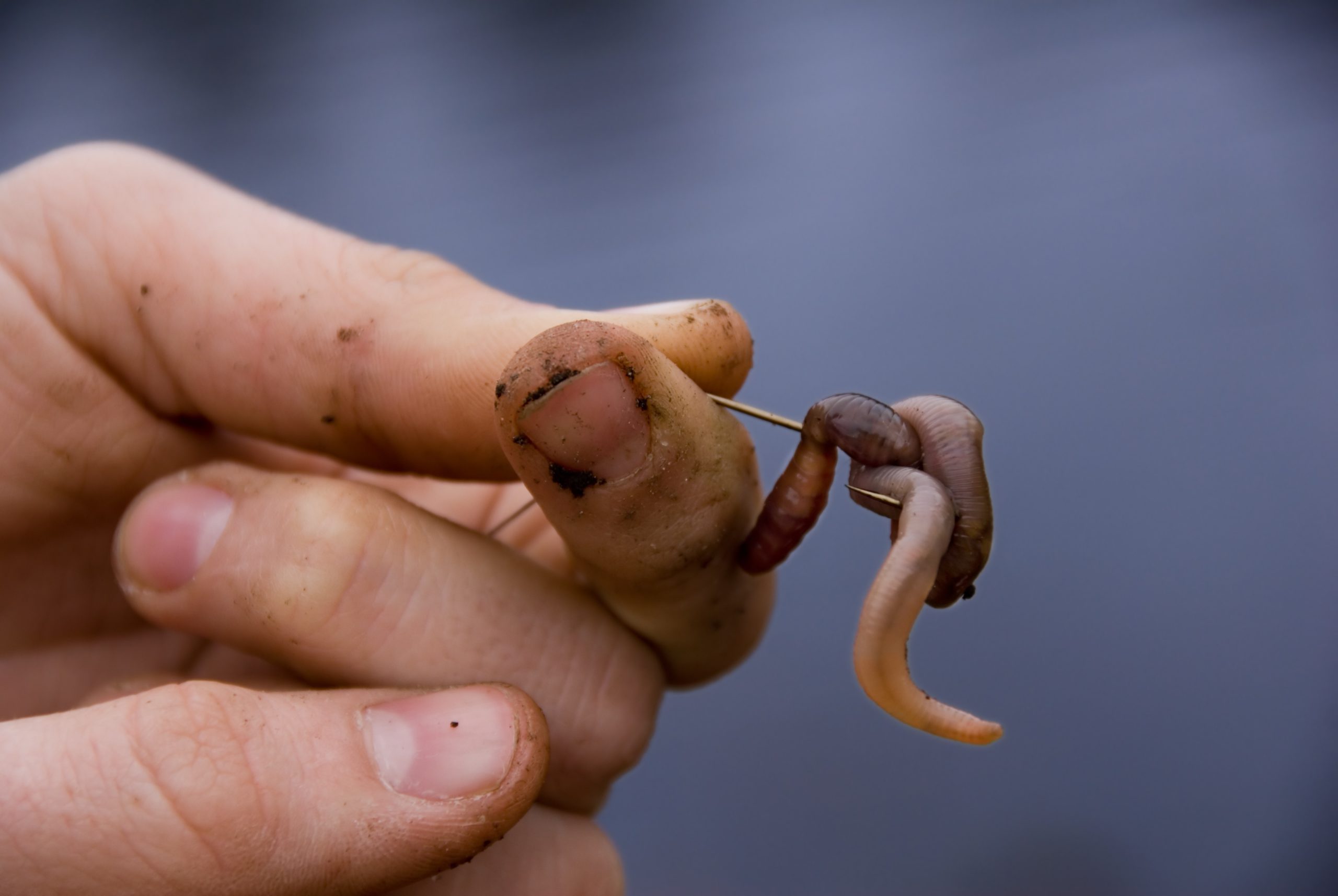 Although little fish love to pick at your hook and steal the bait without getting caught, you have to understand that hooking things properly is only a personal measure that works sometimes. Instead of trying to make your hooking mechanism flawless, it is so much easier just to bring a ton of fishing bait with you. The more you have, the higher your chances of catching fish. It means much more time in the water instead of using all of your valuable fishing day trying to put another piece of bait on a bare hook. It can get annoying so make sure you bring enough.

What Species Of Fish Can Be Caught On Live Worms?

There are quite a few fish species that can be caught on live worms such as nightcrawlers, red worms, and other earthworms. Keep in mind that they will not be absurdly huge most of the time. Earthworms are particularly good at catching panfish such as bluegill, redear, and green sunfish. You can also use them to catch bullhead catfish, smaller channel catfish, white bass, crappie, and smaller largemouth or smallmouth bass. You can also have a pretty productive day targeting walleye, suckers rock bass, trout, and yellow perch. It really depends what is local.

Believe it or not, you can rarely catch very big fish on a sliver of dead worm. It happens but it doesn’t happen very often. We also like using worms for saltwater fish too. Big species like striped bass will engulf a well fished one. Specifically speaking, the fish you are going after tend to be much smaller in size and you are probably catching them for bait or for catch and release fun. With this in mind, be aware that they can tempt most species that swim in freshwater. Do not be afraid to adapt them for your inshore fishing games too. They can catch oceanic species.

Why To Choose Worms Over Other Live Bait Options

There are many good reasons why you may to choose to go for worms instead of other live bait options such as crickets, maggots, leeches, or minnows. One of the main reasons is because they are easy to get and take care of. You can source them from your garden or lawn, a local fishing store, a pet store, or even certain grocery stores that have a sport section. Another reason is because you are not allowed to use other baits in certain bodies of water.

Where the catching of live bait is prohibited, you may not be able to get minnows or other baitfish from the water or they may be to expensive at the store. This can make using earthworms a great choice. Another popular reason may be that the local fish in your area are already conditioned to eating them. They may be your best live bait option in places where worms are used often. They are also very cheap depending on where you source them. They cost less than crickets and minnows but can be just as effective.

There are a few drastic differences between fishing with live worms and using artificial worm lures. The first one is size. Unless you are using very big European nightcrawlers, there is often a size difference between  worm lures and actual worms. This is important to understanding that the size of fish your going to catch is going to be bigger on a lure so naturally, you will catch less of them. Every body of water usually has much more juvenile fish. Big fish equal less fish.

If your going after panfish or anything any smaller than a bass, you would be more productive using live bait instead. Originally designed as bass fishing tackle, worm lures are also not near as attractive naturally. You have to impart your own action to worm lures to make them effective in comparison to the real animals that can be productive while you wait. Worm lures also need special hooks to use properly unless you purchase some that are already ready to go.

Does The Species Of Worm Even Matter to The Fish?

Believe it or not, the species of worm you decide to use will modify your success. Common fishing earthworms include European nightcrawlers, red worms, and a few others. Some are even dyed green and some claim that this makes a more effective option. They also vary in size so make sure to use the smaller species for panfish and the larger ones for carp, bass, pike, and walleye. Many will instead try to use mealworms, wax worms, or maggots too which all work.

They can all be very productive in their own right. The main thing to understand is that you will have to find what the fish in your area prefer to eat. Pretty much all species of worm work for smaller fish but it takes a very sizable, healthy, and juicy worm to tempt the bigger ones. If bigger ones are all you have with you and you are after small fish, you can pinch the worm in half or into pieces. If you are after bigger fish and only small worms are available, use more.

There are a few different ways to hook a worm and the way you do it has a lot to do with the size of the bait as well as the size of the fish you want to catch. For bluegill and panfish, using a smaller worm is recommended. To hook it right, understand that they like the bait presented naturally. A good way to rig it is to use a very long shank hook. Peirce the worm once near the top of the body and once more near the bottom of the body.

Straighten the bait out on the hook. You should be left with a worm pierced only twice and both ends should be enticing in the water. Alternatively, you can also thread it onto the look and out the side exactly like a jig. Go through the worm just below the head and thread it on until the hook comes out itself. This method will make it harder to steal but it will die a lot quicker. 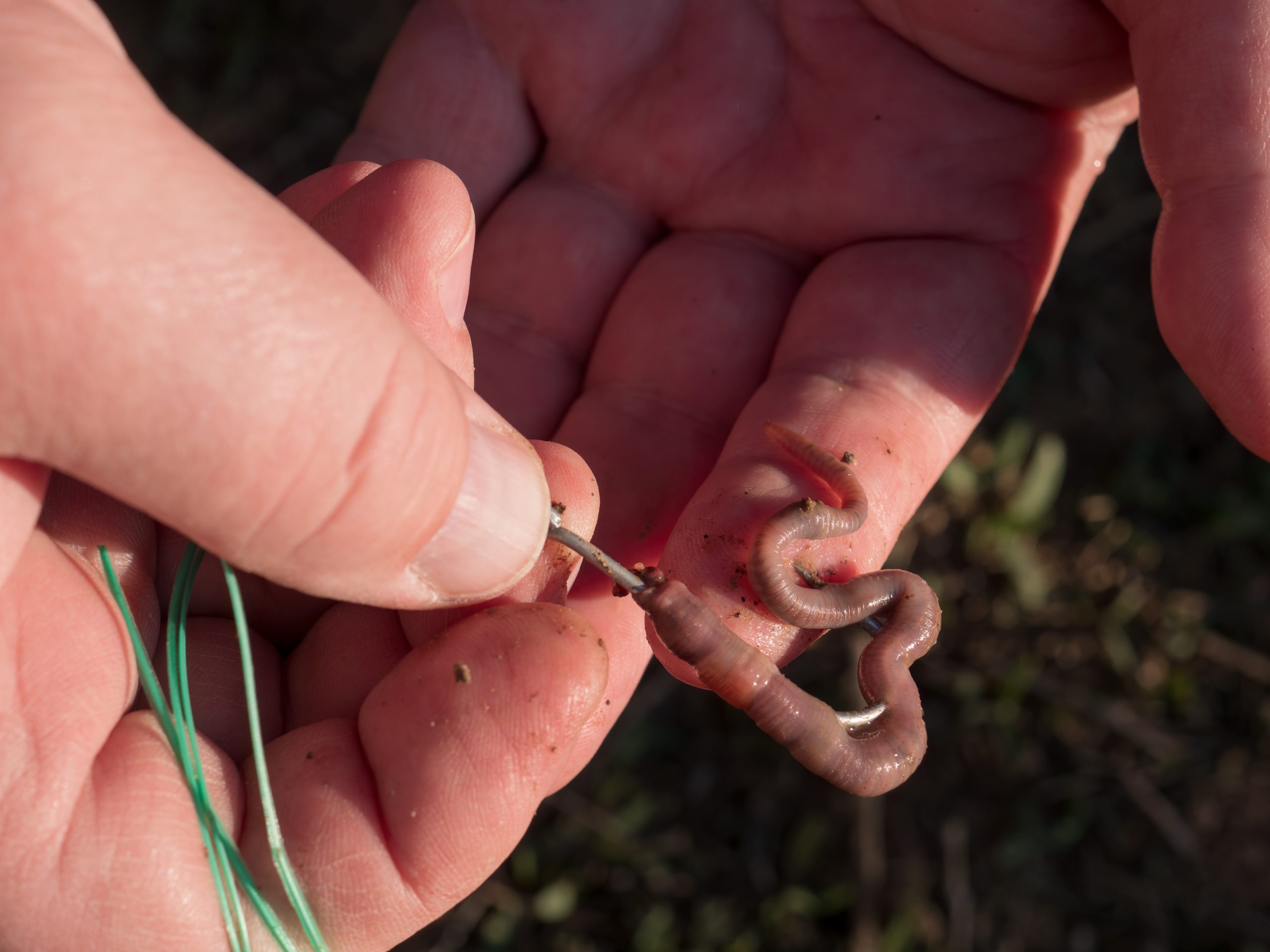 How To Catch Fish With Worms – The Process Explained

There are quite a lot of ways to have a fresh supply of fishing worms for your next fishing trip. You can lure them out of the ground with electricity, sound, vibrations, or you can dig them up manually. You can also turn over logs and tree branches to find them. You can also purchase them from a tackle supply store, a pet store, or a sporting good store. Once you do, you need to make sure you find a good spot to fish. Make sure to find the fish before you catch them.

The rig you decide to use is up to you. Regardless if you decide to use a basic bobber rig or some other rig, they can all work. Make sure that the rig you use correctly fits the water and fish you want to catch. Next, you want to hook your nightcrawler correctly. Once you do that, it is only a matter of casting and waiting until you get a bite. It really is that simple.

To summarize, there is not a ton of difficulty in using worms to catch fish. Once you learn how, you can always see your catch rate go up more when you are fishing at local farm ponds or small town lakes and reservoirs. No matter how you decide to rig them or fish them. You can be pretty sure that they will produce for you wherever you go fishing. Many younger anglers have started here and went onto become legends in the sport. Some of us never decide to leave and it’s alright. Now that you can fish them properly, leave us a comment below if we helped you out!

David Moore is a participant in the Amazon Services LLC Associates Program, an affiliate advertising program designed to provide a means for sites to earn advertising fees by advertising and linking to Amazon

Get Our Exclusive Guide to Crappie!

Show me the new guide!