Setting the hook is the first step that you need to learn after you learn how to cast your rod and choose baits. The hook is arguably the most important piece of gear on your fishing rig. Most modern fishing hooks are plenty sharp enough to bring heat to our scaly friends due to modern manufacturing methods such as chemical sharpening. Even so, you can have the sharpest and highest quality hook in the world but it will do you no good unless you can successfully drive it into the mouth of a fish.

We are going to go over the most common and basic versions of hooks as well as how to stab fish with them for more catches. This is not an exhaustive list of every single type of hook that there is. It is just going to cover what is the most popular and how setting the hook is done for them.

1. Baitholder Hook – Use A Standard Hookset

When you get a bite, reel in the slack with your reel, and pull your rod until it loads up. There really isn’t a certain direction for the rod. Go upwards quickly, slowly, or sideways quickly or slowly. This is because it has so many barbs on the hook shank. It makes hooking the fish easier.

Worm hooks are popular in bass fishing. Called a worm hook for a reason, the original design lets you rig soft plastic worms weedless. There are basic worm hooks as well as extra-wide gap worm hooks. Both work the same aside from the fact that the extra-wide gap has a little more room on the bend. They make the Texas rig possible. Regardless of which one you decide to use, however, the way to use the hook effectively is the same. It requires that the fish get the entire bait in its mouth first.

When that happens, it should start to swim off. When it does, reel into the fish until there is just a hair of slack in the fishing line. Reel, reel, reel, stop, and right at the last second, give that rod a pop. Pop the rod vertically to the right or left around two or ten o’clock. When you do that, you make the fish open its mouth a little wider and the corner of its jaw exposes the point of the hook.

3. Jig Hook – Use A Fast Vertical Lift Of The Rod 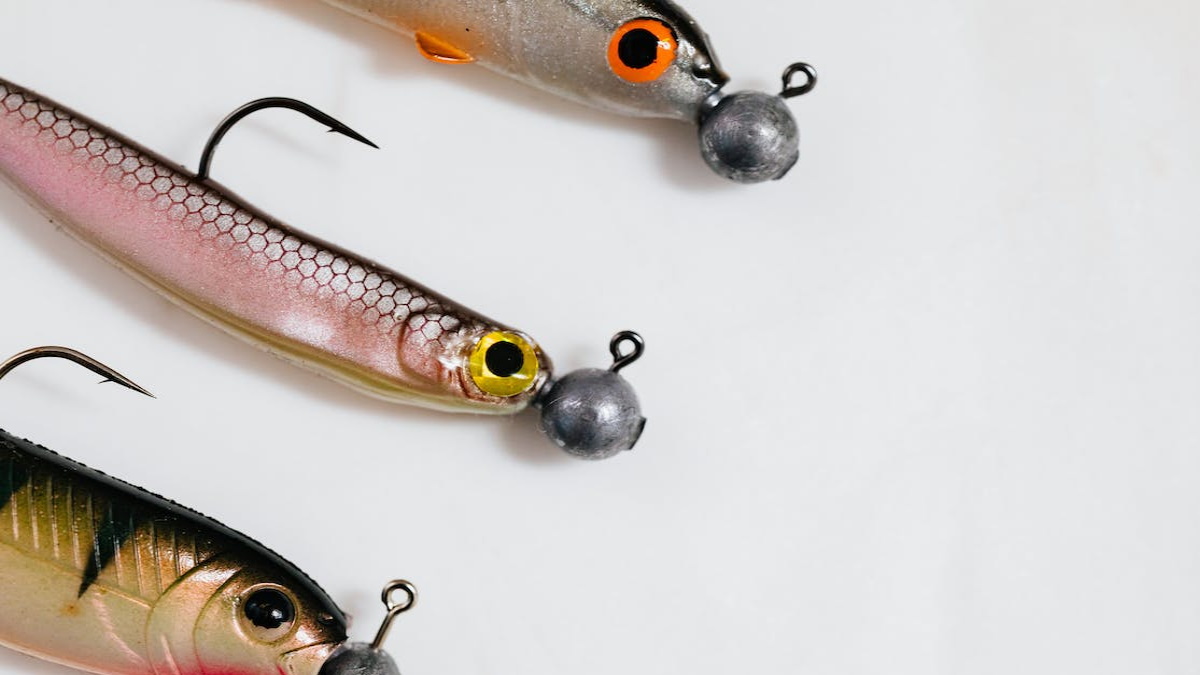 Jig hooks are rarely used by themselves in fishing. More times than not, they are put into molds so they can obtain lead or tungsten casts around the hook for added weight. In the form of jigheads, they are a great hook to add jig bodies or live bait too. A good hookup on a jig starts with a good horizontal presentation in the water. Because of the angle at which the hook eye sits, having the bait lay perfectly sideways in the water is essential to having the hook make proper contact. This starts with using the right fishing knot to tie it.

Use a triple surgeon’s loop. Pass the line through the jighead, make a lot of tag end on the other side, and tie a basic overhand knot with three wraps. Pull it tight. The result is a hook that sits in the water perfectly. Now when you go fish with your bait, lift the rod tip vertically to make the point dig into the roof of the fish’s mouth. Don’t ease into either. Pop it or the fish may spit it out.

4. Circle Hook – Reel In And Don’t Set Anything

Circle hooks may be the easiest hook to set in the entire sport. This is because you really don’t set it at all. Circle hooks set themselves. The way the barb points back at the shank will set the hook on the fish in the corner of the mouth when it swims off. Circle hooks are wonderful for reducing the mortality to fish and they even fill a niche where setting the hook may be too difficult such as in shark fishing. They also make it very difficult for the fish to pop off once the hook has done its job.

Wait until a fish grabs your bait and swims off. When it does, start reeling in normally, and don’t you dare pick up that rod until it loads up. When it loads up, you can take the rod in hand and fight the fish as normal. Setting the hook will not work and it will just rip the hook out before it has a chance to work properly.

All weedless hooks are not created equal. There are weedless octopus hooks, weedless j-hooks, weedless jigs, weedless Aberdeens, and many others too. When a person asks how to set a weedless hook, straight directions cause more confusion. Because there are so many different versions of weedless presentations, a good rule of thumb is to set it a little slower than the non-weedless version.

6. Treble Hook – Set The Hook To One Side You have already seen it a million times. They get stuck in your fingers, stuck in your hands, stuck in your bags, and stuck to absolutely everything else. I am talking of none other than the treble hook. They are effective at getting tangled up in every bit of grass, vegetation, and submerged cover in the water. Once you get past all of that, every crankbait and every jerkbait in your box has a pair too.

So, what is the right way to stick fish with the treble? To be quite honest, most of the time, it doesn’t really matter. Usually, fish hit treble hooks so hard that they hook themselves anyways. During the times when they don’t, a good and solid pop to one side is enough for almost every fish. If you find a problem actually hooking up, use these first.

There is a big learning curve for all new frog fishermen. The hook on a hollow-body frog is the hardest one to master. The advantage of a frog lure is that you can fish all of the heavy grass mats and nasty stuff in the water where the big bass hide. A problem is that the hook is not exposed and you need the fish to bite it first. When you do get a fish to bite, the hookset is complicated, to say the least

Assuming correctly that you are fishing at least a 65-pound braid, you need to let the fish run with the lure in its mouth for a few seconds, reel in all of the slack in the line and set that hook upwards and to the side. Do not be stingy with how hard either. It needs to be set hard. if it isn’t you won’t expose the hook. If it feels too soft, it is too soft. Set it harder.

8. Aberdeen Hook – Use A Standard Hookset

The Aberdeen hook is a basic j-hook that uses a very thin wire. Aberdeen is popular for rigging up with live baitfish. The very thin wire puts a smaller hole into the bait and it stays alive a lot longer. Aberdeen hooks generally have a long shank and a very sharp point. The live bait that you put on the hook doesn’t really matter. By using a standard hookset, you can get the most effectiveness out of your bait. Just a very basic pull in any direction is enough to make the hook work correctly.

The octopus hook has the eye bent at an angle. A reason for the bend is to effectively make it into a snell. Nothing is wrong with tying a knot directly to it but the way it works depends on the knot you use. If you are using it as a snell, set it vertically. If you are attaching it directly to a line, set it sideways.

The angle of the eye provides more friction at certain angles and will perform better as a snell than a common j-hook variety of the same size and weight. Pop it when you set it too. None of this gradual stuff. Pop it into the fish and watch the rod load up. You need the extra speed to stick catfish or other bony fish. These are usually what you are after when this hook is used.

10. Kahle Hook – They Accept Setting It And Reeling

The Kahle hook is a very special hook type that can be set or left in a rod holder to set itself. Kahle hooks are used primarily for using big baits. These are a very versatile hook choice for many rigs because they can be set by the angler or left alone so the fish hooks itself. This special hook allows you to do both.

Because of this, you don’t really have to worry about the method of how to drive it in. There is a method to making it work though. I always like to set it by completely yanking the rod entirely sideways. This will tag the fish if it tries to swim off and it will also reduce the mortality if you are catching and releasing. Use this type of hook. They just catch fish.

So How Do You Set The Hook On A Fish?

The answer? Very carefully in most cases. There is a basic pull and tug for most traditional barbed hooks and a continuous reel for the circle hook. Largely, it depends on what hook type you are using, how big it is, and what bait you are putting on it. Aside from that, deciding on a method is really up to you and how you fish. While this is not a complete list of every single way, how to set the hook is a skill that must be mastered.

If you ever expect to become good at catching and landing fish, it’s a must. In short, there are so many hooks of different shapes and sizes that one way is not sufficient in covering the methodology. Find out what type of hook you are using and make sure to run compatible bait on it in addition to a proper rig.

What are your thoughts?

David Moore is the CEO and founder of Moore & Co. He has experience in tackle-making, fishing, boating, and wildlife conservation. Now an established name in the industry, David calls Ohio home. You can reach him at www.onestoptackleshop.com.