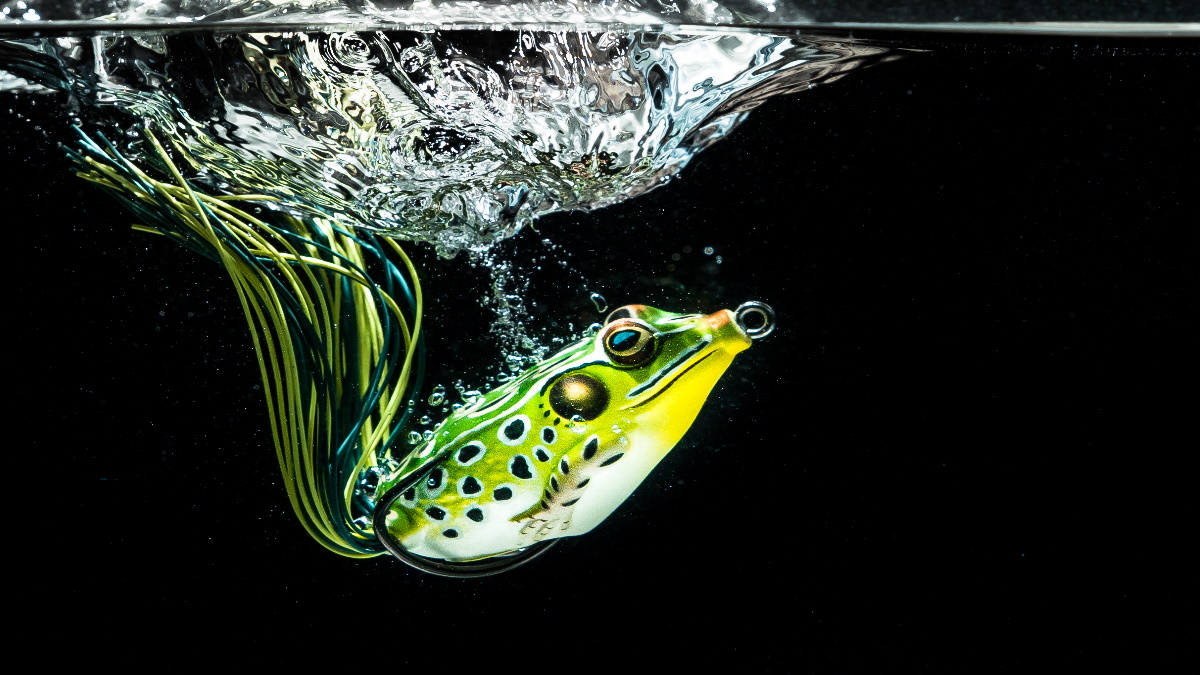 If you can remember two factors when you are fishing hollow body frogs, you can catch fish much more consistently. Learning how to fish with frogs can be achieved much more easily if you understand both. They are both extremely important. The creature you are imitating is the first point to be considered. Frogs don’t necessarily need to look like a frog to catch huge fish on them. They can easily be used to mimic bait fish, rodents, and even crayfish.

As made clear by the visuals of the Kopper’s Live Target Frog, it certainly looks like a frog. These types of lures were made specifically for throwing into the water’s mess and were the reason why hollow body frogs were invented. This is the second point. Your frog needs to perform well in this environment. We are referring to sunken trees, grass mats, moss, reed beds, lily pads, and other similar vegetation. In saying that, having a lure that is well built for this kind of fishing is advantageous.

Most hollow body frog lures are made for this very purpose however some may do a better job for one reason or another. This particular lure does a great job of doing pretty much everything you want to do with a frog lure. This is a review of the Kopper’s Live Target Hollow Body Frog. This review is not intended to portray any other lure in any manner, positive or negative. This review tells some of the features that the lure offers and provides anglers with a great lure to go frogging with.

This review doesn’t attempt to convey messages of similar lures from other manufacturers or even other lures made by the same company. It was made for the sole purpose of providing anglers with a means to catch more fish utilizing this particular bait. It is one of the best frog lures on the market.

What Is Included With The Kopper’s Live Target Frog?

How Well Does It Keep Out Water?

This lure will never get water in it. Never. It is a problem you will never have to worry about in this lure. It makes it so much easier to successfully frog fish when you never have to squeeze the  water out of the lure. This lure is extremely good at keeping dry on the inside. The nose of the lure is completely sealed so water never finds its way in. Getting water in the nose of the lure seems to be a common complaint with many hollow body frogs. Not this one. This one has this feature

already covered for the angler so they don’t have to worry about it. For those unaware, water can sometimes get into the belly cavity via the line tie of a hollow body and cause it to sink. This is a problem because you do not want a frog lure sinking. They are topwater lures. If anything, the fish is able to rip up the lure good enough to let water inside. Then again, by that time, its time to get a new lure anyways.

Softness and Pliability Of The Plastic

This lure is extremely soft. So much so that it takes almost no effort to fully collapse the entire body of the bait. You setting the hook with some braid on a frog this soft will often increase your hookup ratio by at least ten percent. This frog’s pliability is what I consider to be the golden standard for which all other frog lures on the market are compared to. Being so soft however, the life of the lure is slightly decreased compared to firmer frogs for this reason. That isn’t to say however that this

frog won’t last for years and years of huge fish to come. It certainly is durable enough for that. When compared to other competing lures, it doesn’t last as long but it does come pretty close. It may start ripping about one week sooner than the firmer frogs. You will have to decide if one week is enough to get a firmer frog in the first place. Chances are that you will want a lure that performs better for the entire life of the lure instead. If that is the case, consider giving this one a try first.

How Are The Hooks?

The double frog hook on this lure is probably the best I have ever seen for any hollow body frog. The hooks are great quality. They are so sharp that you have to be careful handling these lures. I have to agree that these hooks are for the most part, perfect. I do not have one negative thing to say about the quality that was put into the manufacturing of the hooks.

The hooks stick fish so well that it even increase your hookup ratio sometimes. I have buzzed this lure across the surface of grass mats and sometimes fish hit it so hard that they hook themselves. Yes. You read that correctly. The fish hooked themselves on a frog lure simply because of how sharp the hooks are.

Walking this bait is actually very easy. It walks very well. A very common modification many make to this bait is to trim the skirts down about an inch. Many even suggest trimming one leg shorter than the other to make it walk even better. The truth though is that it walks fine right out of the box. Keeping the legs longer will give you a bigger profile in the water and even help you target slightly bigger fish. By using your rod tip, you can very easily get this frog to walk the dog. It almost always

swims straight up. If it rolls or lands on its side, the lure always tends to right itself. That means this lure is very balanced and well engineered. Some hollow bodies will tend to roll over and this negatively effects their action. The way they designed it is nice because you can throw the lure pretty much however you wish and it will almost always fix itself in the water. If it doesn’t, it tend to right itself after about three seconds of retrieving. The walk the dog method works great in colder water and warmer water alike. Just the fact that this lures does much of the walking for you is a plus.

A Rainbow Of Colors

The realism in this particular is a force to be reckoned with. It is one of the prettiest looking baits on the market. The frog comes in twelve different colors. Yes. You read that right. Twelve. It comes in an Emerald Green which imitates a common Leopard Frog. It also comes in a yellow and black which attempts to go after a Yellow banded poison dart frog. The yellow coloring is so the lure shows up well in dirtier water. They also have a solid black frog which is good for fishing in the shadows or at night. Black casts a silhouette  of prey at the surface when the fish are unable to identify it. The next is a

brown. Pretty much the same story, a darker color shows up better in low light conditions but this one can also be used in the broad daylight with much effectiveness. Since some rodents are brown, you can imitate those as well. There is also an Emerald Red that has a yellow belly and a green and red top. This is good for imitating natural frogs. Bass are used to seeing frogs with yellow bellies. Next is a green yellow which is a Bullfrog pattern. This one is probably the most used. It has

a natural pearl underside which just drives Largemouth wild. The next color in the lineup is a white. It has a white belly and a white body which us good for cold water fishing. Almost identical to the Emerald green color, the flour green and yellow pattern trades in the white on the lure for a light yellow. The final color is a green brown. This color mimics pretty much every natural frog out there.

There certainly is no debate about it. One of the best hollow body lures available is the Kopper’s Live Target Frog. It walks well, it looks extremely realistic, it is easy on the wallet, it doesn’t take on water, the hooks are perfect, and it will last almost forever. It really is everything you could ever want or need in a hollow body. If you ever thought about just picking up one frog lure, you should try this one. This lure will catch fish for you again and again and again.

Have you ever tried this lure? Let us know how it worked for you by leaving a reply below this post! We are interested in hearing what you have to say!

2 thoughts on “Review of the Kopper’s Live Target Frog”